Because no other word will do

Once upon a time words like “upon” and “due to” and “utilize” crept into our language. I have no idea how they’ve managed to endure. Where most people rant on about politics or family dysfunction, for me it’s all about the words.

The words we speak.

The words we write.

They’re powerful. I’m sure there’s a very good reason why a person would use “due to,” but for me, I fall strongly outside the line.

Let’s look at the facts, shall we? (Add shall to my list.) 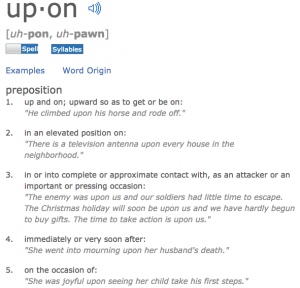 It sounds too put on. Or maybe I’m too far up in the head of Hemingway, having freshly drunk the last drop of The Paris Wife. He’ll do that to a chap, don’t you think? Isn’t it simpler to write “on” instead of “upon” and “because” rather than “due to”? The game was canceled because of the weather. Okay, fine.

Even Hem parodies the use of utilize. What would Ezra Pound or Gertrude Stein say about that?

And while we’re on Hemingway, please do read The Paris Wife. It’s a lovely take on the remarkable Elizabeth Hadley Richardson, Hemingway’s first wife who was nothing but true and good and straight—the rock that grounded his troubled early career. The kind of woman who said it like it was. Nothing was put on about her.

Sometimes I think life is a writer’s curse and also our greatest asset. At times life tugs on our cuff to leave the words where they are and live a bit. Otherwise we wouldn’t have a well of new ideas from which to draw. It seems circuitous—the way writing follows living and living feeds writing. Do you agree?

Of course there are times when no other word will do. Then by all means use “upon” and “due” and “utilize” without abandon. Having worked with engineers for years I know in technical circles utilize does serve a legitimate purpose. Fine.

But when we do leave a word on the page, let it be the right word. Not because we must use it, but simply because no other word will do.