Starting a novel is like falling in love #amwriting 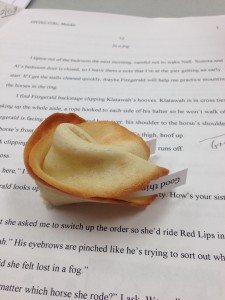 That first idea. That first flutter. That moment when you go “ah ha! That’s the one!” People ask me how I know. How do I decide what to write about. All I can say is this: I walk around with an obscene knot of ideas (which explains why I often look like I’m in a daze). Most are terrible. Some have legs. Coloring all of this is what’s going on in my life, what I’m reading, and what happens to be selling in the marketplace — or what agents and editors want to sell next in the marketplace (based on their manuscript wishlist and the contests created by the insanely awesome Brenda Drake that leverage #MSWL). Usually the idea I decide to chase just comes to me when I least expect it.

You never see it coming.

At first you start out all giddy. Everything’s fresh and new and uncomplicated. Your whole world is sweeter. You want to tell everyone you know, but you hold back so you don’t jinx it. That first raised eyebrow or hesitation might send you sinking back into: this is all wrong for me. You start to question why you ever thought you’re the one for this idea. And even if you do share your idea, and your friends jump up and down for you, you doubt yourself anyway.

You get a few chapters in, and one day you’re cruising along and you hit your first bump. You need space. You step away from the keyboard and you’re like: this is not who I thought you were. The characters are taking on lives of their own, and the story has all kinds of problems you have to solve and you really don’t want to. It’s like one giant disaster of words begging for you to rearrange them.

That’s when you go hit your head on the wall and complain to your critique partners. It happens. You fart around until eventually the characters and their problems call you back to fix them. You try to fix them. You’re in too deep to walk away from them now. And you’re like: okay, we’re going in that direction? I’ve never done that before. We’re going for funny? Or dark? Or sad? This is weird for me, but hey, I’ll try it. For you.

And then at some point you have to just take that leap. Even if you think the story will never see a spine or a bookshelf — you stick with it. You hope others will see what you see in it. Because, you’re in love. The story isn’t what you thought it would be when you started out — it’s better.

Carolyn is in the let’s get to know each other phase with her protagonist, a thirteen-year-old boy who turns to a life of crime in order to survive the complicated world of middle school. What business does a 40-something mom have writing from that point of view? Don’t answer that. Her critique partner pointed out that J.K. Rowling did it, why not try?