Twenty years ago, I had to find a new home for Saberah, my Arabian horse. I was in college and my parents were moving from the property where Dad had built a two-stall barn for Saberah and my sister’s Morgan, Cornelius. I was devastated. Then, the perfect person came along. She wanted to take Saberah to the mountains of Virginia and promised to keep in touch.

Over the years, I wasn’t surprised to learn that Saberah had captured the attention of many in Virginia. Today, I learned one of his fans is a local artist who submitted an original studio pencil drawing of Saberah and his best friend, Thunder, to the Central Virginia Horse Rescue organization. It was selected, which means Saberah is the “poster horse,” and his picture is being used for notecards. All proceeds go to the Animal Rescue League.

Almost ten years since cancer took Saberah from us, he’s still making an impact. I couldn’t be more proud. May he continue to help in raising money for his less fortunate fellow equines. 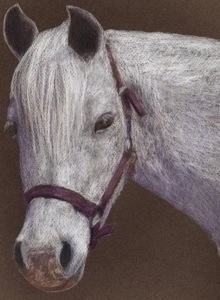