My panic in the sauce aisle

I’m all for healthy food my kids will eat and enjoy. Don’t get me wrong though. I’m not above slinging hot dogs to the back of the minivan on our way to gymnastics and I can whip up mac-n-cheese in my sleep, but thanks to my sister, I learned a thing or two about how to shop for and prepare more healthy meals for my family.

At first, I resisted, thinking it’s all a ruse. Organic anything is trendy and costly. Are we simply absorbing the extra costs created by the certification process for farms to be labeled as organic, or does it really benefit us? A pesticide-free ear of corn from a local farmer may be laced with worms or go off in a day. And who has time to be running out every two seconds for fresh produce.

But what if there is a better way?

My curiosity got the best of me. I thought maybe the products I was buying were fine after all. Yet a niggling doubt, the one that makes me wonder why our country is so unhealthy, made me second guess feeding my child that nugget or fast food burger that won’t spoil after a few days or weeks or months. Everything’s pre-made and packaged to have this insane shelf life. I found a french fry in the back of my minivan from six months ago and it still looked like a french fry.

The other thing I thought of is the money that’s being made at our health expense. Ever hear of the “whine factor?” I hate to think that grocers prey on our weakness as parents to buy food based on its appeal to our kids (that’s why they strategically place the high-sugar cereals on low shelves). Our job as a parent is tough enough.

As for buying based on price, that’s out too. Coupons are great, but not if they’re for products that will raise cholesterol or make me crave more sugar and then feel bad about myself when I indulge.

I mean with so many choices out there on grocery shelves, how do we choose the right products? Most of the time, I don’t venture off my course because of time and habit. And ignorance, I’ll admit it. I’m too busy to stop and read labels. I know it sounds pathetic, but it’s true.

But, if you are to tell me that option A is processed with chemicals that are potentially cancer-causing and option B isn’t, the decision is then simple. I will gladly buy option B, and even pay more for it, if I know that extra cost is justified. And I won’t take the advertisers word for it like when the label reads “no high fructose corn syrup” but the number one ingredient is corn syrup.

I decided to give the whole foods, non-processed, chemical-free lifestyle a shot. Especially now, while I still have power over what is available in my fridge and pantry for my kids to eat.

Take corn for instance. Non-organic corn is injected with pesticide so that if a bug nibbles on it out in the cornfield, it dies. It’s a win-win for the chemical companies and farmers. All the weeds die and the corn thrives. And then we feed that same corn to our kids.

Today I braved the store with the cheat sheet my sister carefully prepared for me. No rBgh, no soy lechitin, which I can’t even pronounce. No high fructose corn syrup. Got it. You don’t have to buy all organic fruits and veges, just these on this list. And there’s a reason for it, but I can’t remember right now what that is exactly except that it has to do with the dirty dozen report that comes out each year. I’ll take big sis’s word for it. If only I could have her radiant skin, too. Maybe I will?

As I was trolling the produce area with my list, I have to say a few people looked at me. And you know what? It felt good. I’m sure they were thinking, look at that educated mindful consumer, picking up each vegetable and fruit and examining it (actually, I was trying to figure out what the heck some of them were, like this bumpy green cousin to the artichoke?). Or they were thinking I was a complete idiot and didn’t know what it was (and they would be correct. I didn’t. It’s a cherimoya, by the way). In any case, I felt empowered. Kind of.

I actually came across something called “Carnival Califlower.” It’s bright purple. Really? Even I could see the problem with that.

Next was cheese. All dairy must be rBgh free. Buy European. Okay. Keep in mind now, my kids are made of cheese they eat it so often. And every block or wedge of individually wrapped, artfully arranged European cheeses I again could not pronounce was on average about $13 a piece. At this rate, I’d need my own cow. Then I found one that seemed okay, and not terribly priced, and I tossed it into my nest of greenery.

But I panicked in the sauce aisle. You have to understand, my husband loves his barbecue. So do my kids. So when every bottle I picked up had the dreaded unacceptable soy lechitin and high fructose corn syrup under the list of ingredients, not to mention fakey stuff to add color and taste, I started to sweat. I seriously was about to give up. I mean, what was life without good ol’ barbecue sauce? 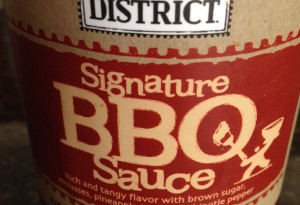 Then I found one. One! In the entire long shelf of options. It’s called Giant Eagle Market District Signature BBQ Sauce. They’re about as good with original titles as I am. Made with “rich and tangy flavor with brown sugar, molasses, pineapple juice and chipotle pepper.” We’ll give it a shot.

Meat was easy cause my kids are basically vegetarians that I have to trick into eating anything that comes from a living animal. But then again, I’m pretty sneaky and I can probably disguise anything if given half the chance. I went for the turkey, chicken, salmon, and pork tenderloin. And Basmati rice (Sam’s sells a zippered burlap sack of it that could feed a small village). Milk, eggs, yogurt (produced without the use of toxic persistent pesticides, artificial hormones, antibiotics and GMOs).

I realized I had traversed the entire store along its perimeter and the only item in my cart that came in a box was the plain, original Shredded Wheat (which, after being doused in warm milk and brown sugar, is supposed to taste less like cardboard). Peanut butter (another staple of kids’ diet)—I went out on a limb and picked up the natural one without high fructose corn syrup and has honey instead. We’ll see. I’m feeling pretty good about the choices I made at the store tonight. But tomorrow they may revolt or kick me out of the family.

The true test will be that moment when they barrel off the bus tomorrow, clutching their achy tummies and growling for a bag of Cheetos. Will I stand firm? Absolutely (because we have no Cheetos in the house). Will the vege and fruit tray hold up? With a little hummus and Ranch dressing?

I can only hope.