The day my grandpa sprung me from high school 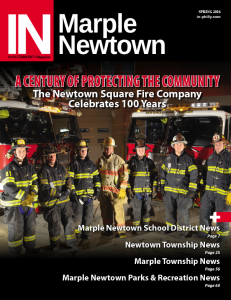 I might have been the only kid at Marple Newtown High School whose grandpa sprung her out of English class mid-day. It was freshman year. I was a quiet girl, relatively new to the district. Our principal appeared in the doorway and announced in front of the whole class that my grandpa had called (gasp!), and I was to go home — immediately — to catch my horses.

I died of embarrassment.

Anyway, Marple Newtown isn’t in the sticks. It’s a beautiful suburb outside Philadelphia, with a dog in every yard. Farther away, tucked along the windy back roads, you may encounter a barn or two, but most zoning doesn’t allow for it. Which is to say, I imagine the principal would’ve been more likely to assume he’d been prank called.

But this was my grandpa we’re talking about.

So yeah, I high tailed it out of there, but was forever stamped as “the horse girl.”

I have so many equally fun memories during our years in Marple Newtown. In fact, one shenanigan became the inspiration behind my latest novel, which is currently on the market for representation. DICK JAMES, BESTSELLER is my retelling of the popular television show BREAKING BAD. It’s about an honor student who teams up with the basketball star to grow in popularity by writing English essays for their classmates under the pen name Dick James. If I see you at our fall reunion, ask me about it.

Thank you to the Philly-area IN Community Magazine for featuring an interview with me in your Spring issue. If you live in Marple Newtown, check out page 48 of IN Marple Newtown edition. A special thank you to staff writer, Nicole Tafe, for the chance revisit a place of my past.

Carolyn Menke is the author of RETURN TO ME, a WWII-set women’s fiction, and I’M YOURS, the companion novella, both published in 2015 by The Wild Rose Press. She had also completed another adult contemporary novel and three novels for kids. Her dad proudly built a barn for their horses and dug every fence post hole himself. Incidentally, this wasn’t the first time the horses escaped, and it wouldn’t be the last.